Love potatoes? These South America native tubers have been growing and enjoyed in Britain since 1586. They’ve lifted Western Europe out of famine, allowing the populations to prosper well into the 20th century. This delicious tuber is positively a part of our heritage!

There are over 5,000 potato varieties worldwide, and 3,000 of which are only found in Peru. In the UK and across Europe, hundreds of years of enjoyment have led to an  incredible, array of beautiful and mouth-watering varieties. British supermarkets, however, may lead you to believe otherwise…

Ever been in a supermarket and only found Maris Peer? That’s definitely enough to kill your enthusiasm for a potato dinner…

So, what happened to heritage?

In the first half of the twentieth century, heritage potatoes were grown, loved and cooked in households across the UK. But after the second world war, a devastated country was pressured to bypass the growing of potatoes for delicious nuances. The goal was, instead, to feed a hungry country. Crops were prized for their yield rather than colour and flavour. As commercialism took over and supermarkets began their reign, profit over produce became the commercial mantra.

Why are heritage varieties so good?

With modern breeding practices aiming to make the potato as profitable and uniform as possible, the charm and palatability found in many heritage varieties is by-passed. Heritage potatoes, therefore, are often found with colours, shapes, sizes and textures  missing from their commercial cousins. Hmm, no wonder heritage potatoes are so prized! But, with their shorter growing seasons, enjoy heritage potatoes while they’re here…

From waxy to floury, potatoes come in a spectrum of textures. These texture make certain varieties suited to particular dishes and styles of cooking, so it’s always good to know the texture of the variety your buying. Floury potatoes have a high starch content and low water content, with a dry texture that falls apart easily and soaks up flavour. Waxy potatoes are so for their low starch and high water content that can be intense in flavour but not soak up any additional flavours so well. All-purpose fall somewhere in-between.

But, waxy or floury, our heritage potatoes are always delicious. (Move over Maris Peer…)

Bred on Scotland’s seventh largest (and very beautiful) island, the Arran Victory 1918 was created to mark the end of World War One. Round in shape, and with deep blue-pink skin and white fluffy flesh, this potato makes the perfect mash, pie topping or a delicious bake.

This red skinned, red fleshed potato was bred to add a shock of colour to the meals of the Duke of Burgundy. Long oval in shape, sweet in flavour and floury in texture, Highland Burgundy Reds are excellent for striking roast potatoes, chips, crisps and baked potatoes. Keep the skin on to better retain colour! 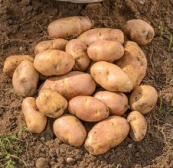 From a variety of potato still popular today in the Andes, the Inca Belle is a beautifully golden, oval potato. It’s nutty flavour, smooth flesh and unique cooking properties (it’ll cook much quicker than the varieties you’re probably used to!) make it a cook’s favourite. Best for roasting – hands down as we did the heritage roast test ourselves!

The first potatoes in the UK bred from the indigenous Phureja potatoes of Peru, this beautiful variety is a real treat to experience. With golden flesh and skin, a wonderfully moreish flavour, and fluffy texture, this potato is perfect for roasting, mashing and baking.

With pink and white skin, firm waxy texture and moreish flavour, this quick to cook potato is a treat in the kitchen. Best for salads and stews with it’s slightly sweet, nutty flavour and smooth texture.

With pink and white skins and fluffy white flesh, these beauties are ideal for roasting, baking and mashing.

Originally found in a Dutch crop of classic Duke of Yorks, this potato quickly became popular. With fluffy, creamy flesh, sweet taste and gorgeously red-hued skin, this heritage potato is a fabulous all-rounder. However, these beauties are perfect for roasting as they get deliciously crispy skins.

With light buttery, sweet flesh and floury texture, this indigo skinned potato is a ktichen delight. While the origin of this particular variety is a mystery, it’s been grown in the Shetland Islands since at least the early 1900s. Bake the shetland black whole, in it’s skin, for warming, crisp potato deliciousness.

These small, flavourful potatoes have a deep indigo skin and and intensely purple flesh. They are, visually, perhaps the most striking potato we’ve seen here at Fin and Farm. With a floury texture, it’s best to leave the skin on these potatoes to help retain colour when cooking (plus, it’s tasty and more nutritious!). Best for roasting, baking and mashing for an eye catching twist on some classics!

**not an extensive list of our potatoes! Explore varieties here.**

While these potatoes have their ‘best for’ uses as determined by how floury or waxy they are – don’t be afraid to experiment! Small, waxy potatoes can be delicious roasted whole for intense, crisp flavour bites, thrown into stews, or crushed with oil, herbs and garlic. These wonderful potatoes deserve to be enjoyed any way you like – so let us know what you think each variety is best for and what you’ve been cooking with them!

Bonus! Did you know…?

The potato certainly caused a stir when first introduced to this part of the world, and was treated, at first, with a mix of love and fear. Over in North America, during the gold rush when nutritious food was scarce and gold abundant, there was a time when potatoes were worth more than gold!