Picture from Veggie on a Penny

What could be a lovelier sight than a fluffy mound of mashed potato?  But to do it right is still an art form and everyone has their own preferred routine.

But…one thing that everyone must agree on is that the right potato is key.

For our potato of the month, we have three heritage varieties for you to try – and all make spectacular mash.

All three of these are floury potatoes with a low water content so are pretty good keepers if kept cool and dry.

All these glorious potatoes are grown on the fertile Morghew Estate which sits on the Kent/Sussex border.

Arran Victory were bred in 1918 on the Isle of Arran by Douglas McElvie to mark the end of WW1.  These are real potatoes with their own individual taste and features and not merely a renamed hybrid…as happens far too often in commercial potato marketing.

The Arran Victory does boast a pretty old parentage from further South in Sutton’s Abundance which dates back to the 1700’s when Dartmoor was the potato growing hub of Northern Europe…and potatoes were named like romantic roses (ie the Beauty of Hebron or Idler’s Colossal…what a shame that didn’t continue).

The flesh is floury and pure white – which looks gorgeous when mashed.  The skin is a bright, deep rose pink, although that is generally lost in cooking (unless you are chipping in the skins).

When mashing, the flesh is very floury so there is lots of opportunity to soak in butter and cream without losing the light texture.

Likewise, these roast and chip very well, but are not as recommending for steaming or baking in their skins unless you handle them delicately. 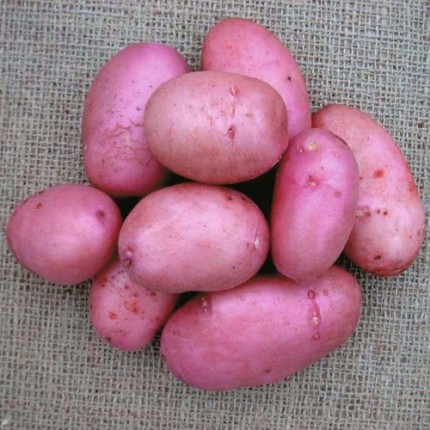 Kerr’s Pink is known as the quintessentially Irish potato, but actually it is another Scottish variety, which only became popular in Ireland from the early 1900’s when Mr Kerr started growing and selling them (before that they were called Henry’s Seedling).

This picture of the Kerr’s Pink is rather brighter than they generally are (we were a bit snap happy with the image, I think) – they’re a rather more gently tinted and usually fairly irregular in shape…a kind of squished oval.

They have a good starchy flavour that just asks for more butter and their own slight woodiness, which makes a lovely sweet mash.  We think very good as a topping for shepherd’s pie and the like, as they have a light texture and don’t overpower the heavier dish.

Kerr’s Pink are sterling mashers, but unless you commit to keeping a watchful eye on them, never cook to serve as boiled potatoes as they don’t like being overcooked and can become crumbly.

The Red Duke of York is another war baby and become popular around 1942.  It’s nice and easy to grow with a versatile texture and easy flavour to make the most of all available veg during wartime austerity.  However, this one wasn’t a hybrid developed by a horticulturalist but a happy accident discovered in Holland.

The Red Duke of York has a thin skin which makes it an easy peeler – so popular with many chefs.  The skin has a slight crazing, which isn’t that attractive, but doesn’t affect the flavour at all.

The flesh is creamy in colour and this is the least floury of our three heritage potatoes.  So, the Duke is more versatile in the kitchen being pretty good as a masher, chipper, roaster and general good egg.  The flavour is pretty rich and creamy for a floury potato.

We feel almost guilty even sharing this recipe with you as it has so much butter, we had to read list twice – a whopping 750g per kg of potatoes….we will only dream about the taste! 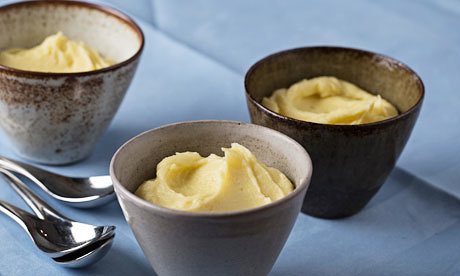 new potatoes 1kg (the recipe calls for: Ratte, Desiree or Maris Piper – but we would use the Duke of York)
water 2 litres
salt 49g
milk 200g
unsalted butter 750g

Wash the potatoes but don’t peel them yet. Place them in a pan with cold water and 40g salt and bring to boil then simmer gently for 1 hour until completely cooked but not falling apart. Drain the potatoes and then peel them with a paring knife as quickly as possible.

Push, but not too hard

Bring half the milk and half the butter to the boil in a wide pan, then remove from the heat. Sit a mouli or a potato ricer on top of the pan and pass the potatoes through into the hot liquid. The key is not to push them too hard – you don’t want to stretch the gluten. Adding little cubes of butter to the potatoes will help them go through much more easily.

Sieve, but keep it quick

Pass the mash through a sieve, twice. At the restaurant we use a fine drum sieve, which allows you to put all your body weight behind it, but you could use a normal sieve at home. You want to do this as quickly as possible so you can serve the mash while it’s still hot.

This version is obviously closer to the one we use at home where we have substituted vegan mayonnaise for butter (it has a touch of garlic in and is completely delicious) – or often just olive oil.